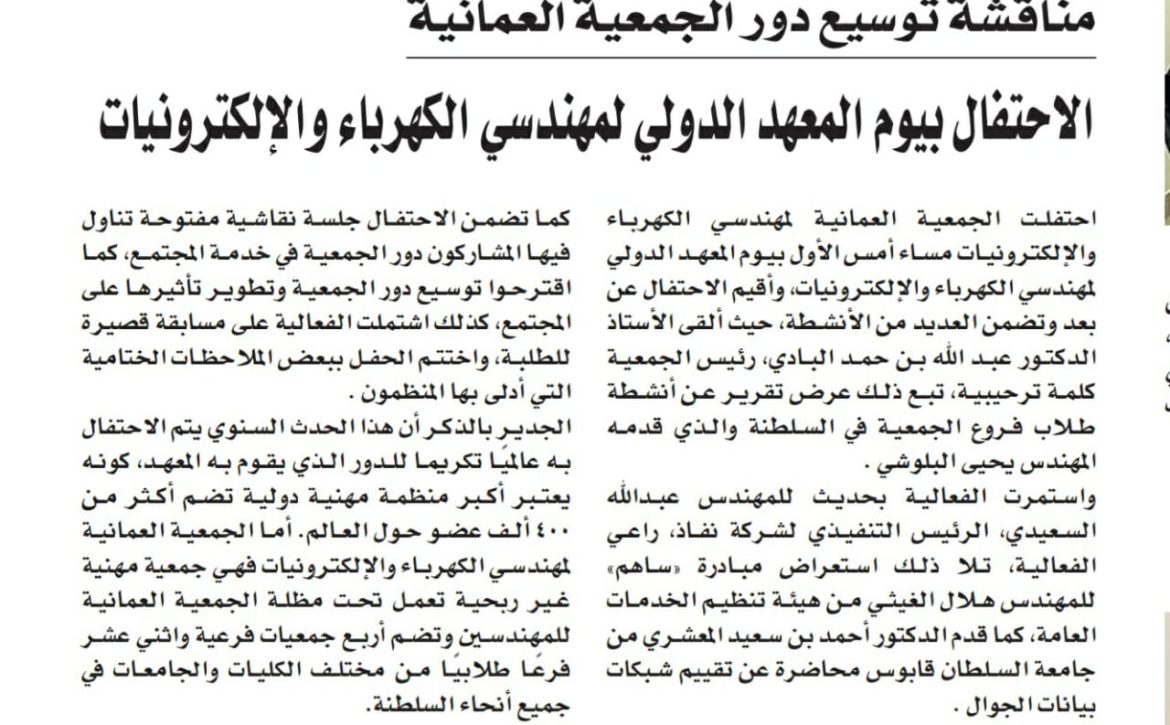 IEEE Oman Section has celebrated on 6th October the IEEE Day 2020. This is an annual event that is celebrated globally to recognize the role of the Institute of Electrical & Electronics Engineers (IEEE) as the largest international professional organization with over 400 thousand members worldwide.

The event, which was conducted virtually, has included several activities. The event was inaugurated with a welcoming speech by Prof. Abdullah Al Badi, Chair of the Section. This was followed by a report on IEEE Students’ activities in Oman, which was presented by Engr. Yahya Al Balushi.

The event resumed with a talk by Engr. Abdullah Al-Saidi, CEO of Nafath Company, the event’s sponsor. This was followed by a talk on the “Sahim” initiative by Engr. Hilal Al-Gaithi from Authority for Public Utilities Regulation. A technical talk on the evaluation of Mobile data networks was presented by Dr. Ahmed Al Maashri, Sultan Qaboos University.

The talks were followed by an open discussion, where participants discussed the role of IEEE Oman in serving the community. Suggestions were made to expand the role of the Section and to improve its impact on society.

A short competition for students was assumed afterward, which was followed by a few concluding remarks made by the organizers.

A web workshop entitled “Android APP Development with AI Engine” was held on the 29th of June 2020 under the auspices of Al Musanna College of Technology and IEEE Oman Section.
AI is a technology that is transforming every walks of life. AI enables people to rethink how information is integrated, data are analyzed and result are used to improve the decision-making process. The primary goal of the workshop is to introduce and expose students to this emerging technology and let them incorporate this into the Android App.
Dr. S. V. Tresa Sangeetha, Lecturer of Al Musanna College of Technology, Engineering Department was the resource person. She has designed this workshop so that students will be able to use MIT App inventor, one of the most popular mobile app development cloud-based tool in their future projects. This workshop anticipates encouraging students to propose AI-based projects.
It was an interactive workshop in which participants were taught to develop an Android App using MIT App Inventor. The participants were briefed with various machine learning algorithms and were given a hands-on trial on AI game ‘quick draw’ which was developed using reinforcement learning algorithm. Various AI tools for image classification and audio classification such as teachable machine, image, and an audio classifier were demonstrated with live images and audio samples.
Student participants were encouraged to submit a project using the technology and the application. Before the day ends, the best project proposal was selected and awarded with prizes.