IEEE Oman Section has celebrated on 6th October the IEEE Day 2020. This is an annual event that is celebrated globally to recognize the role of the Institute of Electrical & Electronics Engineers (IEEE) as the largest international professional organization with over 400 thousand members worldwide.

The event, which was conducted virtually, has included several activities. The event was inaugurated with a welcoming speech by Prof. Abdullah Al Badi, Chair of the Section. This was followed by a report on IEEE Students’ activities in Oman, which was presented by Engr. Yahya Al Balushi.

The event resumed with a talk by Engr. Abdullah Al-Saidi, CEO of Nafath Company, the event’s sponsor. This was followed by a talk on the “Sahim” initiative by Engr. Hilal Al-Gaithi from Authority for Public Utilities Regulation. A technical talk on the evaluation of Mobile data networks was presented by Dr. Ahmed Al Maashri, Sultan Qaboos University.

The talks were followed by an open discussion, where participants discussed the role of IEEE Oman in serving the community. Suggestions were made to expand the role of the Section and to improve its impact on society.

A short competition for students was assumed afterward, which was followed by a few concluding remarks made by the organizers. 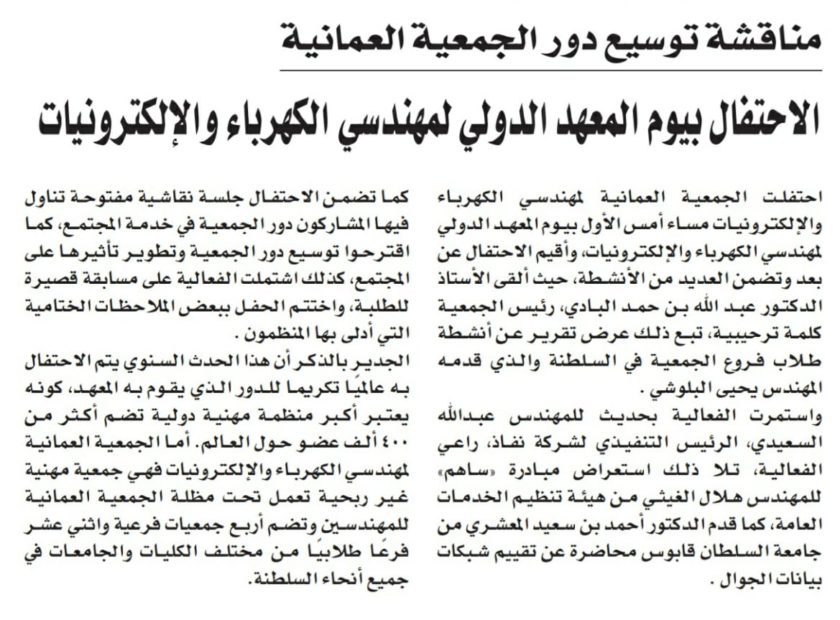